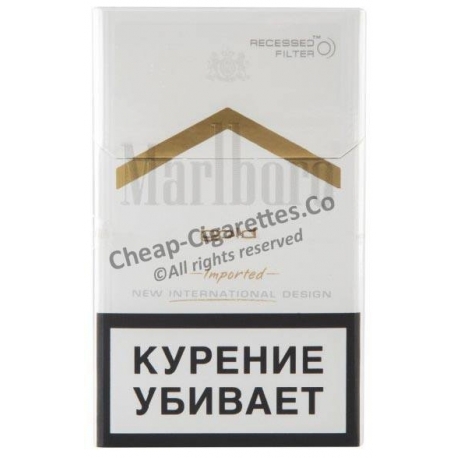 Notify me when available

Philip Morris Company originated in London. Brand name has been chosen after the London’s Great Marlborough Street, where first production factory has been placed.

At the very beginning Marlboro cigarettes have been advertised as female cigarette brand. And initially Philip Morris wanted Marlboro brand to be a women's choice, Because taste was very mild compared to other cigarettes on the market. First slogan of a company was: "Mild As May". Filter has been also designed with red stripe around to hide lipstick touches. There was a logo: "Beauty Tips to Keep the Paper from Your Lips".on this printed red stripe.

Later in 1950, PM changed Marlboro cigarettes and used totally different approach to marketing. Company launched a campaign for changing the Marlboro cigarettes from women’s brand to men’s and masculine it. The first “Marlboro Man” was based on images of brave men like a war journalist, a sea captain, and the legendary cowboy. Cowboy become a real icon of the brand for many years.

The Cowboy campaign, in which the photomodels took part (later they were replaced by real cowboys) had an incredible success. Cowboy - the embodiment of the American spirit – was real “hit the bull’s eye”. Posters represented the real heroes of America - brutal guys who conquer the wild steppes. He conquered all - men and women, blacks and Latinos. Sales of Marlboro in just one year grew so much that they began to occupy the fourth position in the rating of sales of all tobacco products.

In addition, the new Malrboro pack has also become a packaging sensation - it was this brand of cigarettes that was produced in the subsequently packaged "Flip-top" format - a hard-cardboard pencil case with a hinged lid. Such packaging had both practical (cigarettes did not crumple), and enormous marketing significance - now the smoker had to demonstrate to the surrounding pack every time he was going to smoke, because it was inconvenient to open the "flip-top" in his pocket.

Marlboro categories are known with a few variations depending on country and location.

There are only three divisions within Marlboro range:

The mild taste is a distinctive feature of the line previously known as Marlboro Lights.

PM along with other tobacco companies had to remove "Lights” line because that was considered to be misleading and assuring customers that these kind of cigarettes are safer than classical ones.

After re-branding Marlboro Lights became Marlboro Gold. Gold Line is Marlboro cigarettes division that compromises mild but still very tasty flavor. It was a very successful line that by the mid of 90s had a market share almost equal with Flavor line (Red and Full flavor cigarettes)

4 other products in the same category: